Hall and Waite Transition to New Roles with Beach FC 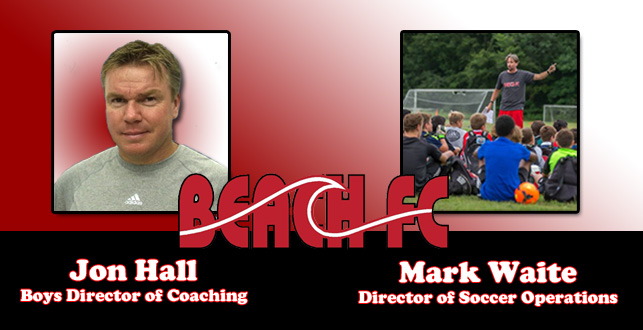 Beach FC is pleased to announce the addition of Jon Hall as the Boys Director of Coaching for the Travel Program starting in September.  Jon is a staple of the Virginia Beach soccer scene at every level, having coached for Beach FC for over a decade while also leading the PDL Piranhas and Norfolk Sharx at different times in his career.  The Piranhas made multiple playoff appearances under the direction of Hall and he has coached his Beach FC teams to State and Regional success.  He also is involved in the VYSA ODP Program as Southeast Director and State ODP Head Coach.  Finally, Jon is also a state coaching education instructor and runs F, E, and D license courses.

Growing up in Southern England, Jon Hall played for Watford FC Academy before he was recruited to play soccer at American University on an athletic scholarship. Jon returned to England after graduation to play with Millwall before ending up back in the United States playing for the Hampton Roads Mariners and Richmond Kickers.

Jon currently holds many coaching licenses, including his USSF A license, USSF National Youth Licesne, and his UEFA B license (Europe).  "I have worked closely with Jon in a number of different capacities within the game and without question his knowledge, passion, and ability to teach and motivate is some of the best I have seen.  He will make a big impact on our programs and we are excited to add him to the team"said Beach FC Executive Director Steve Danbusky.

When asked about joining Beach FC as a full time DOC, Jon responded: "I am tremendously excited to get involved full time in the sport that I love, and especially with Beach FC, the club that I have been with since 2002.  I look forward to joining a forward thinking and progressive staff at an exciting time for soccer development in our country."

As Jon takes the helm of the Boys Travel Program, we are also proud to announce that current Boys DOC Mark Waite will transition into a Director of Soccer Operations role.  Mark will oversee all technical programs and will work closely with our DOC's to implement the club vision.  "As the club has grown, we felt it necessary to add to our staff and to restructure slightly to accommodate the needs of our members and also help accomplish some of the goals that we have set for our club" said Steve Danbusky.  Mark Waite added "As all of our soccer programs have grown and evolved, I look forward to working with our Technical Staff to enhance the experience of every player in the club.  The Boys Travel Program is in very capable hands with Jon at the helm.   We as a club have set lofty goals for ourselves, and I believe now we have the staff in place to help us achieve and hopefully exceed those goals.”

Please join us in welcoming Jon to the team and wishing Mark success in his new role.