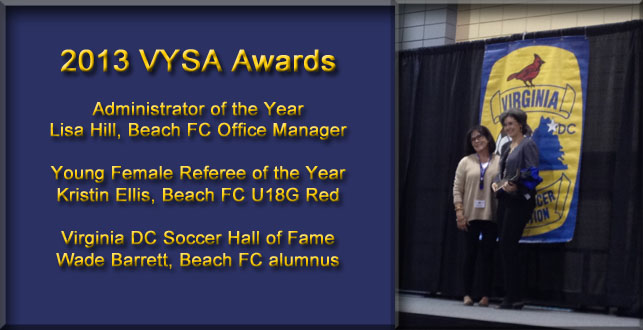 Beach FC was well represented at the recent VYSA Awards Banquet in conjunction with the annual VYSA Convention.  Lisa Hill received Administrator of the Year while current Beach FC player Kristin Ellis received Young Female Referee of the Year and Alum Wade Barrett was inducted into the Hall of Fame.

Lisa Hill has been an integral part of Beach FC’s stability and growth over the past decade.  Starting as a volunteer team manager she quickly transitioned into helping facilitate the team registration process for the entire club.  From there Lisa began working in the Beach FC office and took on many of the administrative duties that make a youth soccer club tick.  “Lisa’s ability to multitask and also see multiple projects through to completion is extremely impressive.  Most people don’t know how much behind the scenes work goes into the successful operation of a youth soccer club, and Lisa is on the front line of that process.  However, one of the most refreshing  characteristics that Lisa possesses is her positive disposition.  She does everything with a smile on her face.  She thoroughly deserves this award and we at Beach FC are excited to see her receive it” said Executive Director Steve Danbusky.

Finally – Beach FC Alumnus Wade Barrett was inducted into the VYSA Hall of Fame at the annual Virginia Youth Soccer Assoc Convention.  Wade played his entire youth in the Beach FC system before going onto play at William & Mary and then captaining the San Jose Earthquakes and Houston Dynamo of MLS while also playing a stint in Europe.  After retiring from playing a few years ago, Wade transitioned to the coaching staff of the Dynamo and continues there today.

Congratulations to Lisa, Kristin, and Wade.  Beach FC is very proud of your accomplishments.